“Mind Boggling Accuracy” – The Mail on Sunday “Sheer Technical Perfection” – Evening Standard Established in March 1980, the Bootleg Beatles are considered to be the absolute best Beatles tribute band in the world. With over 4,000 performances under their belt, The Bootleg Beatles performed all over the world including an invitation to perform as ....

Ticket sales for The Bootleg Beatles unfortunately have now finished!

Established in March 1980, the Bootleg Beatles are considered to be the absolute best Beatles tribute band in the world. With over 4,000 performances under their belt, The Bootleg Beatles performed all over the world including an invitation to perform as the official tribute act on a tour to commemorate The Beatles original US tour.

As The Bootleg Beatles’ popularity increased, one of their gigs in Southampton got noticed by none other than Oasis, which lead the band to perform to a more contemporary audience. Since then, The Bootleg Beatles have shared stages with global stars such as Jon Bon Jovi, Rod Stewart, David Bowie, The Corrs, and Iggy Pop amongst others.

On 30th January 1999, the band played on the rooftop of a famous address – 3, Savile Row, London – which is the former residence of the Beatles’ Apple Company, thus recreating their final live performance on the same rooftop.

In 2002 The Bootleg Beatles played at Queen Elizabeth II’s Golden Jubilee Party at Buckingham Palace and in 2010 the band headlined the Acoustic Stage at world-famous Glastonbury Festival, drawing the largest recorded crows for 5 years.

The band was also featured in different TV and Radio programmes on national and international channels, such as the BBC Television and Radio. The band also performed Sgt. Pepper’s Lonely Hearts Club Band with the royal Liverpool Philharmonic Orchestra at the Royal Albert Hall and the Echo Arena in Liverpool. All concerts were sold out.

The Bootleg Beatles will be performing for the first time ever in Malta on the 18th and 19th January 2020 at the Catholic Institute in Floriana. 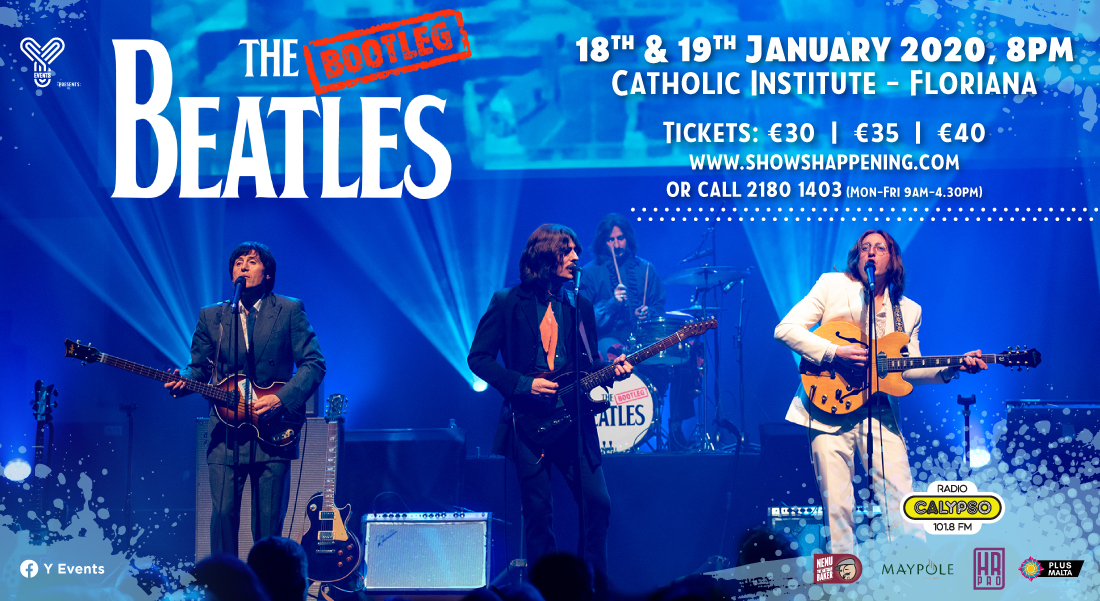