The temple of Ħaġar Qim stands on a hilltop overlooking the sea and the islet of Filfa, not more than 2km south-west of the village of Qrendi. At the bottom of the hill, only 500m away, one finds the remarkable temples of Mnajdra. Both sites are included in the UNESCO World Heritage List.

The temple of Ħaġar Qim stands on a hilltop overlooking the sea and the islet of Filfa, not more than 2km south-west of the village of Qrendi. At the bottom of the hill, only 500m away, one finds the remarkable temples of Mnajdra. Both sites are included in the UNESCO World Heritage List.

18th and 19th century paintings which feature this temple show that Ħaġar Qim was never completely buried as the tallest stones, remained exposed. First excavated in 1839, the remains suggest a date between 3800 – 2200 BC; a period known as the Ġgantija phase in Maltese prehistory.

The site consists of a central building and the remains of at least two more structures. The large forecourt and the monumental facade of the central structure follow the pattern typical of Maltese Prehistoric Temples. Along the external wall, one may find some of the largest megaliths used in the building of these structures, such as a 5.2m high stone and a huge megalith estimated to weigh close to 20 tonnes.

The building itself is made up of a series of C-shaped rooms, known as apses. Walking through the main entrance, one finds a central paved space with an apse on each side. A slab bearing a pair of opposing spirals in relief and a free-standing pillar decorated on all four sides were discovered in the area. These have been replaced with replicas and the originals can be found at the National Museum of Archaeology. A number of stone and clay statuettes of obese figures which have been unearthed in this temple can also be viewed at the museum.

One of the prehistoric chambers at Ħaġar Qim holds an elliptical hole which is hewn out in alignment with the Summer Solstice sunrise. At sunrise, on the first day of summer, the sun’s rays pass through this hole and illuminate a stone slab inside the chamber. A dedicated visitor centre offers information about the site in a fun and interactive manner.

Other Heritage Malta sites in the vicinity: Mnajdra Temples 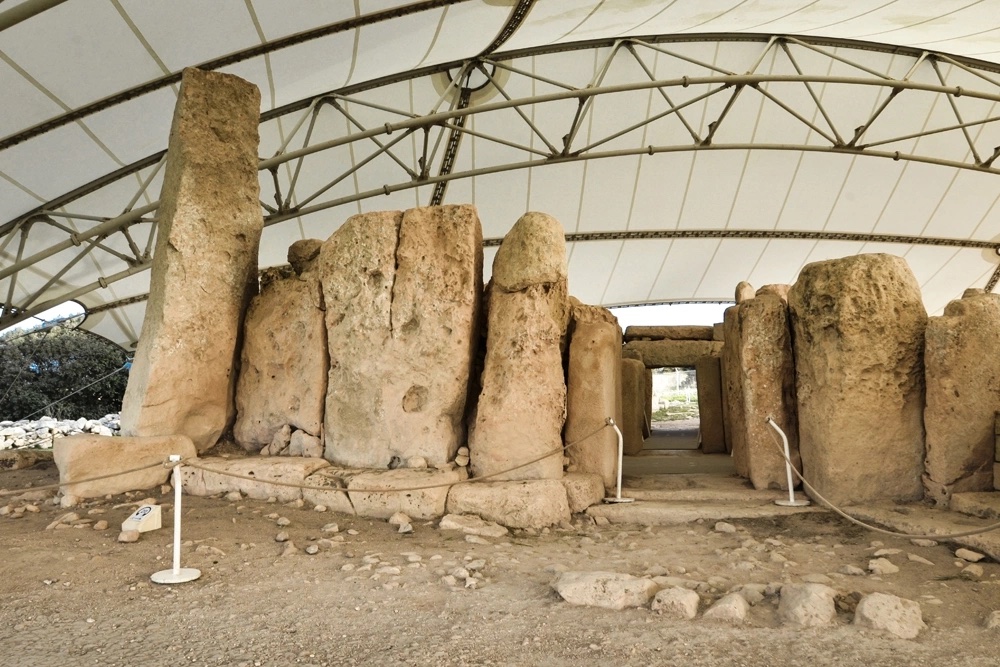