On June 15th, the Malta Philharmonic Orchestra, under the baton of Principal Conductor Sergey Smbatyan, will be teaming up with the acclaimed Japanese violinist Fumiaki Miura to present the opening concert at the 2022 Malta International Music Festival.

On June 15th, the Malta Philharmonic Orchestra, under the baton of Principal Conductor Sergey Smbatyan, will be teaming up with the acclaimed Japanese violinist Fumiaki Miura to present the opening concert at the 2022 Malta International Music Festival.

Taking place at the Mediterranean Conference Centre in Valletta, the evening will begin with a rendition of Composer-in-Residence Alexey Shor’s violin concerto, Phantasms, with Miura taking on the solo role with his 1704 Stradivarius, known as “ex Viotti”, which is kindly loaned by the Munetsugu Foundation. Consisting of three programmatic movements — Dance of the Graces, Elegy and Flight of a Falcon – the work showcases the sublime lyricism and mellifluous qualities that the composer is known for, and provides the perfect precursor for Camille Saint-Saëns rousing and energetic Rondo Capriccioso. An intricate work written for violin and orchestra in 1863, the piece was dedicated to, and premiered by the virtuoso violinist Pablo de Sarasate in 1867, and has continued to delight and fascinate audiences ever since. Finally, the MPO will close off proceedings with excerpts from Aram Khachaturian’s famous and beloved Spartacus Ballet Suites, with the orchestra set to interpret his ‘Introduction and Dance of the Nymphs’, ‘Adagio of Aegina and Harmodius’, ‘Scene and Dance with Crotalums’, ‘Variation of Aegina and Bacchanalia’, ‘Adagio Spartacus and Phrygia’, and ‘Dance of Gaditanae and Victory of Spartacus’. 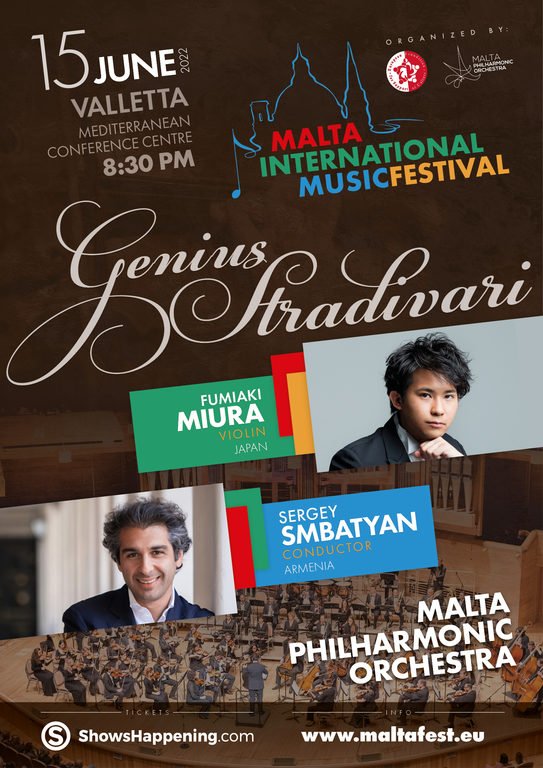