On 22 June internationally acclaimed Ukrainian orchestra – Kyiv Virtuosi – will perform in Malta. The concert will be held at Robert Samut hall featuring world-famous soloists: Maltese pianist Charlene Farrugia and Italian bandoneonist Mario Stefano Pietrodarchi who will be performing alongside the Orchestra under the baton of a star conductor Dmitry Yablonsky (USA/Israel/Spain).

For their final concert at the 2022 Malta International Music Festival on the 22nd of July, the Kyiv Virtuosi Orchestra, under the baton of conductor Dmitry Yablonsky, shall return to the Robert Samut Hall in Floriana, teaming up with two esteemed soloists – Maltese pianist Charlene Farrugia, and Italian bandoneon specialist Mario Stefano Pietrodarchi – to present a varied and intriguing programme of works. The concert will begin with a performance of Composer-in-Residence Alexey Shor’s Bandoneon Concerto, a rich and expressive work full of melodious melodies and sublime orchestration, which was written at the request of Pietrodarchi himself, who is on a self-ascribed mission to revitalise the fortunes of this beautiful but relatively underrepresented instrument. Next, the orchestra will welcome Charlene Farrugia as they set out to interpret Frédéric Chopin's famed Grande Polonaise Brillante for piano and orchestra. Originally composed in 1830-31, Chopin combined the Grande Polonaise Brillante with his Andante Spianato, which he wrote in 1834, joining the two pieces with a fanfare sequence and publishing them as a combined work entitled Andante spianato et grande polonaise brillante, in 1836. For this concert, however, it will solely be the earlier piece that shall be performed, a short, exuberant piece replete with the lyrical beauty that the composer is known for. Yablonsky and the Kyiv Virtuosi shall then present Felix Mendelssohn’s Symphony No. 10, one of a series of thirteen string symphonies which the composer wrote early in his life between 1821 and 1823. Composed in three movements, the work bears many of the defining characteristics of Mendelssohn’s string symphonies, most notably being the defining influence of various Baroque and Classical composers, including Johann Sebastian Bach, Wolfgang Amadeus Mozart and Joseph Haydn. After, Pietrodarchi will return to the stage to present a series of works showcasing the very best of the bandoneon, starting with Nino Rota’s Omaggio a Federico Fellini, which consists of a special arrangement of some of the most memorable pieces of music composed by Rota for three of Fellini’s films – La Dolce Vita, Amarcord and 8 ½. This will be followed by Astor Piazzolla’s Le Grand Tango, a lively and enchanting piece from the man who is perhaps most closely associated with the bandoneon which blends traditional tango rhythms with jazz-inspired orchestration resulting in a dynamic and animated work, further amplified by Pietrodarchi’s exuberant musicality. Finally, the last evening of the Kyiv Virtuosi’s stay in Malta will be rightly brought to a close with a work by a Ukrainian composer – Myroslav Skoryk’s Spanish Dance. Forming the last movement of Skoryk’s Stone Host Suite, which is itself based on themes from Ukrainian poet and playwright Lesia Ukrainka’s work of the same name, the Spanish Dance is highly regarded within Skoryk’s oeuvre, and exhibits the composer’s trademark brand of highly colourful, rhythmically propulsive music. 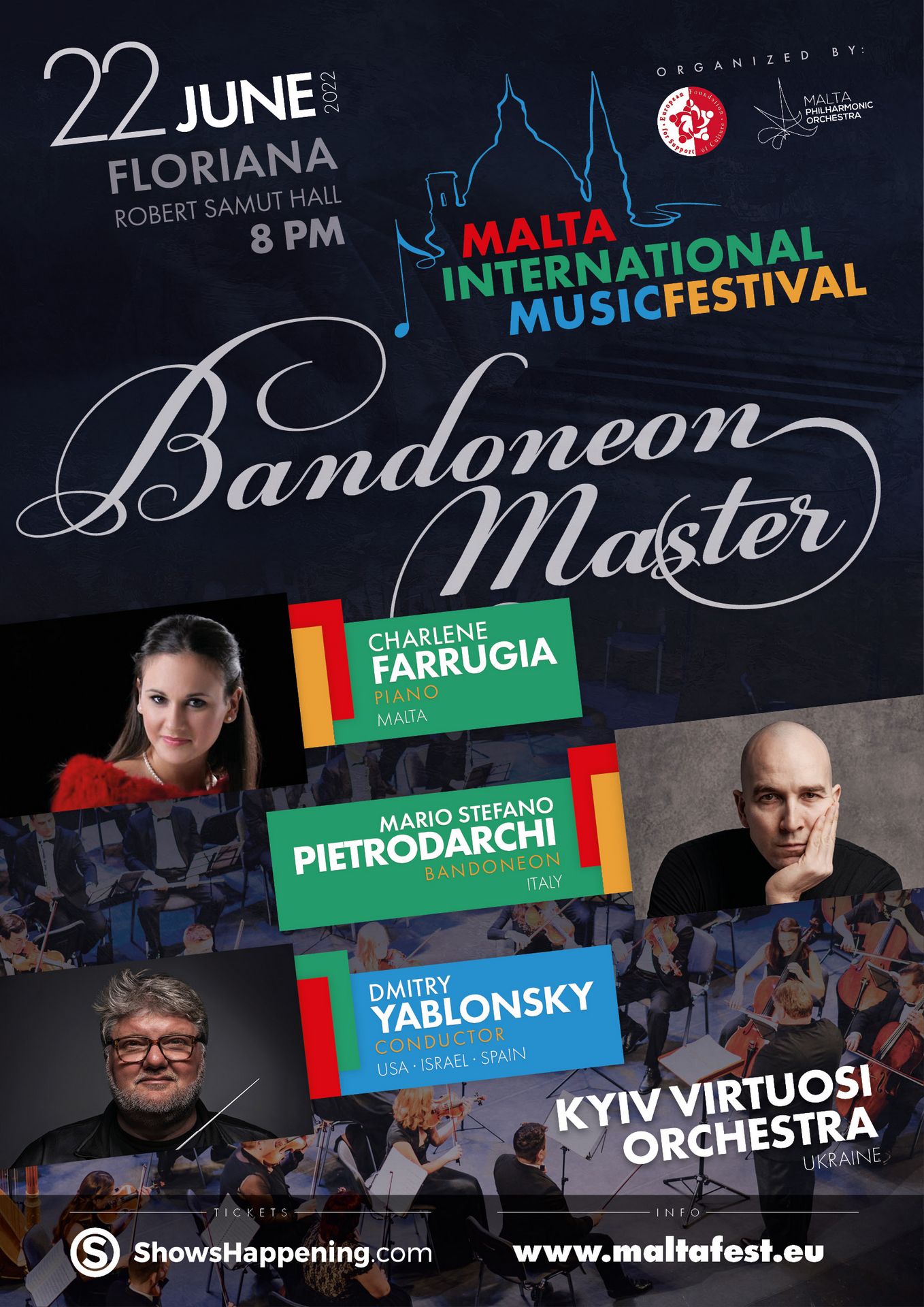