The St Paul Metropolitan Orchestra is preparing for its upcoming performance of Joseph Sammut’s internationally acclaimed Messa da Requiem et Resurrectio et Vita. The work calls for an orchestra composed of strings, woodwinds, French horns, harp, timpani and church organ, together with choir and four soloists. Joseph Sammut's Requiem was premiered in Malta on October 31, 1991 at St John’s Co- Cathedral, Valletta. Mro Sammut wrote the Requiem for Dr. Giorgio Borg Olivier, following the liturgy in Latin and adding to it the sublime thought that has deeply moved and comforted man since time immemorial with the expectation of resurrection and eternal life. The verses that contain this momentous promise also reflect the unshakeable faith and tenacious optimism of the man to whom this Requiem is dedicated.

Sammut’s Requiem was recorded live during its German performance in the Parish Church of St Gebhard in Konstanz on the 11th February, 1995. The 1991 premiere of the Requiem in St John's Co-Cathedral in Valletta was heard by the German management consultant Bernd Glathe who, struck by its international message, wide vision, and musical grandiosity, made arrangements for a German performance in the university city of Konstanz, under the auspices and sponsorship of a German interest group, Music in Management. Again, and with Sammut himself conducting the Sudwestdeutsche Philharmonie Kostanz, the work was extremely well-received by the German audience.

For this performance the St Paul Metropolitan Orchestra has the pleasure of working with the original Alto and Tenor soloists who performed the premiere in 1991, Claire Massa and Joseph Aquilina, together with Rosabelle Bianchi as Soprano, Bass Albert Buttigieg and the St Monica Vocal Ensemble, under the direction of HE Chev Mro Mark Agius. This performance will be held at the St Paul’s Metropolitan Cathedral, Mdina, on Friday, 8th November, 2019 at 7.30pm. Entrance is against a donation of a small fee addressing all generations and criteria.

- Adults €10
- Students, senior citizens and persons with special needs will be able to pre-book their tickets from Orchestra Management and avail themselves of discounted tickets at €8 at the door 30 minutes before the event commences upon presentation of verification.
- Under 10 years FREE 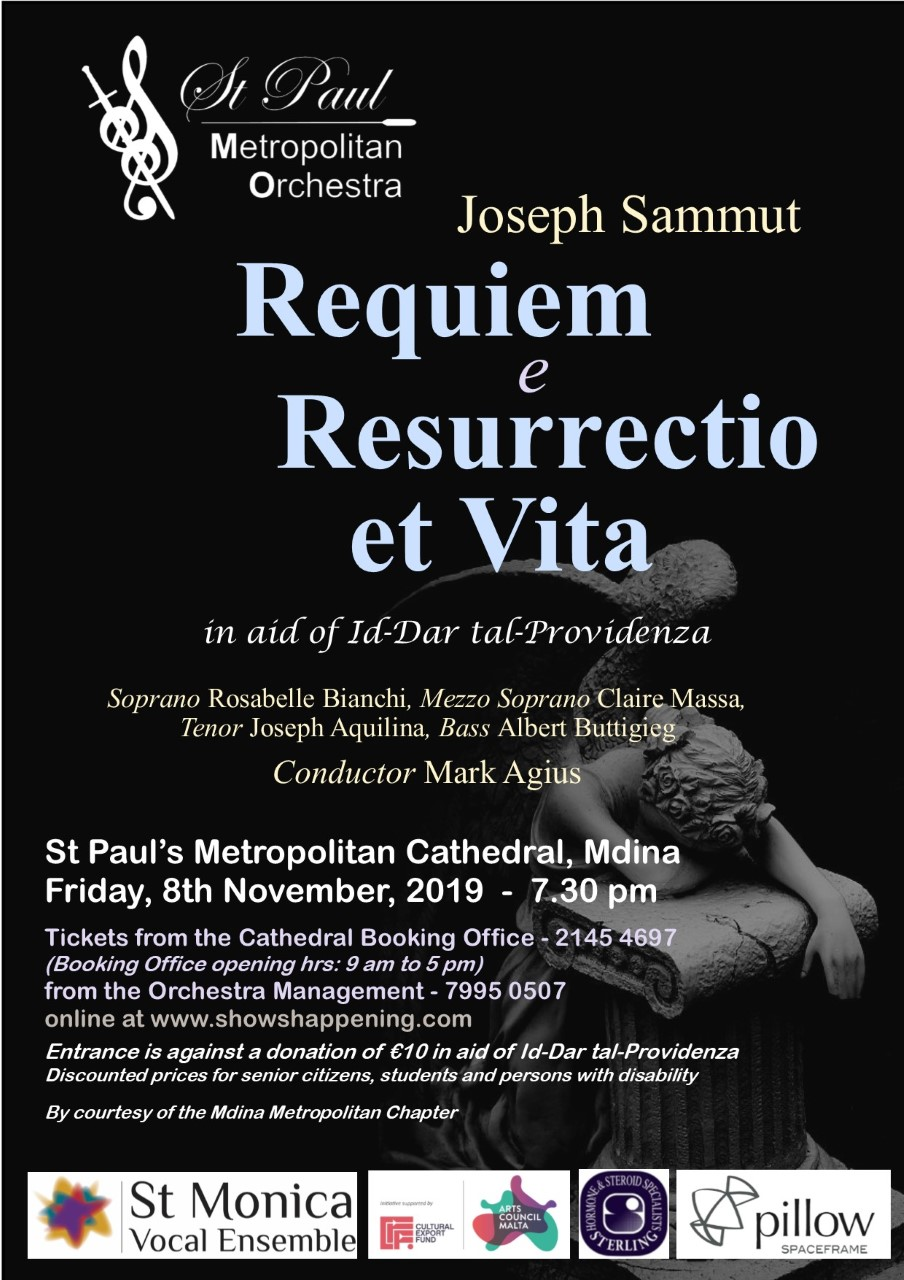