Be there to witness the first-ever Lovin Music Awards concert, featuring an incredible lineup of Malta’s top music acts performing live!Ira Losco, Red Electrick, The Travellers, Fuzzhoneys, Eddie Fresco, Luke Chappell and many others will take to the stage, including a comeback performance by No Bling Show in collaboration with The New Victorians

Be there to witness the first-ever Lovin Music Awards concert, featuring an incredible lineup of Malta’s top music acts performing live!
Ira Losco, Red Electrick, The Travellers, Fuzzhoneys, Eddie Fresco, Luke Chappell and many others will take to the stage, including a comeback performance by No Bling Show in collaboration with The New Victorians.
Each performer will give a unique stage performance of their best songs of the year, curated by creative director Steven Levi Vella.
Sworn hip-hop rivals Lapes and Kaptilu will share the stage for the first time, and many other surprises can be expected from the likes of Gaia Cauchi, Kevin Paul, Maxine, Michela, Owen Leuellen and Giorgia Borg.
Taking place at a brand new concert hall in Paola, the LMAs will be a feast for the senses and a true celebration of local talent.
The Red Carpet will open at 7.30pm and will be hosted by top influencer Sarah Zerafa who will run through the night’s fashion highlights.
At 8pm the show will start with a number of epic performances between each round of awards handed out.
Hosted by Valentina Rossi, Johnathan Cilia and Jon Mallia, a total of 20 awards will be given out on the night, thanks to your online votes.
An after-party will feature all the DJs nominated for the Best DJ Award.
Food on the night will be provided by Genki, Fat Louie’s, Wok to Walk, Dew Fresh, The Lunchbox and Falafel Street.
Tickets are limited and selling fast at just €15. VIPs and early-bird tickets have already SOLD OUT!
The show is a standing event open to anyone aged 17+.
Parking is widely available but Malta Public Transport will also be providing a special service to those who wish to leave their cars at home.
The Lovin Music Awards are organised in collaboration with Ovation, supported by Festivals Malta and sponsored by: Go, Cisk, Pepsi, Bridgepoint, Hero Gaming, EBD Academy, GEMO, Jules, Miss Selfridge, Burger King, Seed Dance Studios, Planet Hollywood, Egg Recruitment, Cafe Cuba, Vascas, Fino, Bortex, TD Plus and Malta Public Transport. 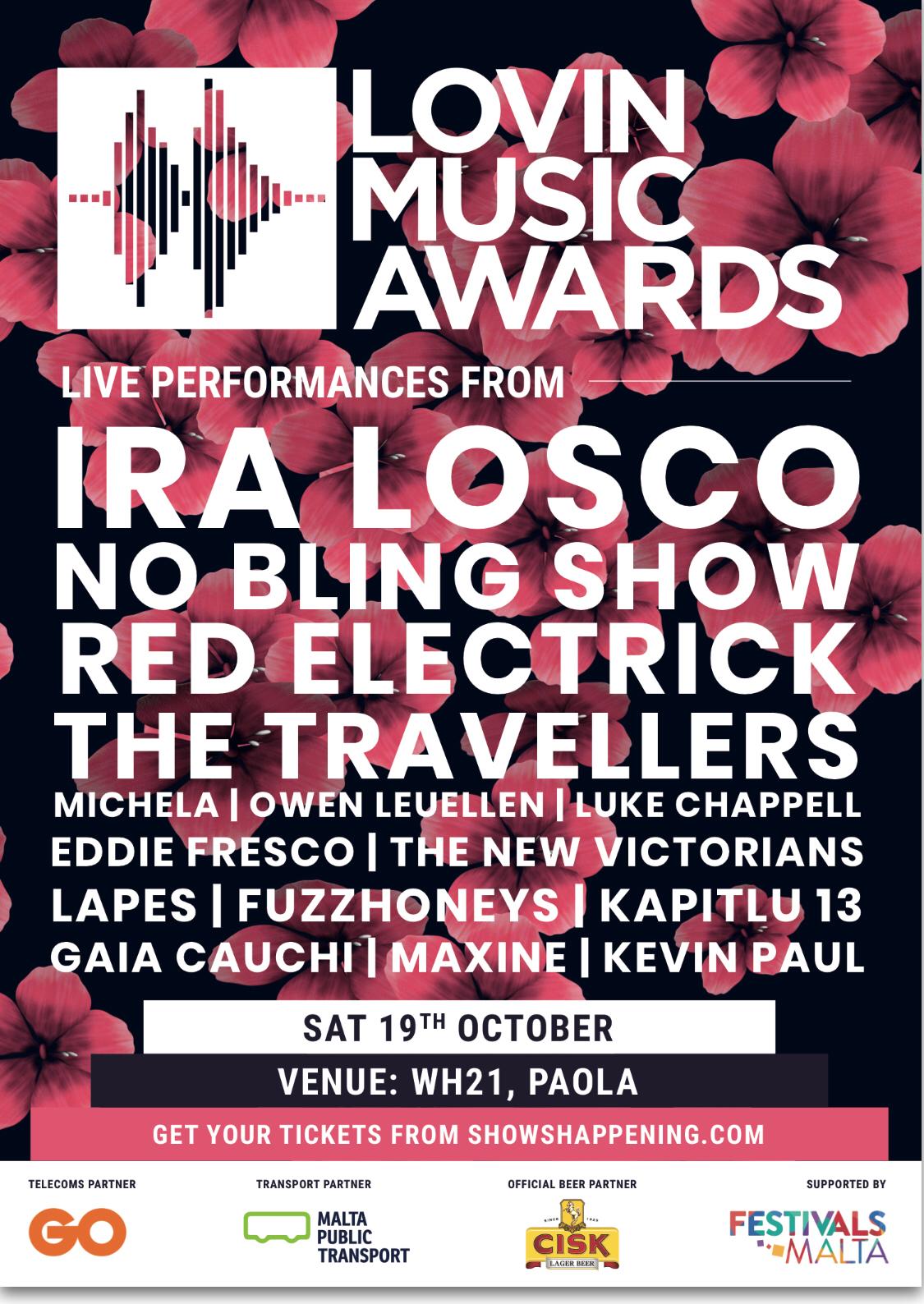