St Paul’s Shipwreck: Oratorio of Mons. Marco Frisinaclick here for the Italian versionThe Oratorio is based mainly on Chapters 27 and 28 of the Acts of the Apostles, which deal about St Paul’s shipwreck on the island of Malta, as well as on the the apostle’s writings and on som....

The Oratorio is based mainly on Chapters 27 and 28 of the Acts of the Apostles, which deal about St Paul’s shipwreck on the island of Malta, as well as on the the apostle’s writings and on some Psalms. Its entire length is of about an hour. The musical language adopted combines tradition and modernity. The use of Gregorian chant in some moments of the Oratorio links it up – emphatically – with the Church’s musical tradition and, at the same time, shows the very significant role of music as a communication tool of the Gospel.

Still to be defined. It will sum up in a single expression the main theme: from the sea, thanks to the words and deeds of the Apostle Paul, redemption reached Malta’s inhabitants.

The Oratorio is divided in seven parts and goes over again the events leading to St Paul’s coming to Malta, which marks the island’s first evangelization. An event – this – which reflects in an exceptional way the strength of the Gospel and the power of Divine Providence, which transforms a disastrous and negative event, as a shipwreck, in an opportunity of grace and salvation.

I part: It is the hymn which the Church’s Liturgy makes use of in the Vespers of the Feast of the Conversion of St Paul. This serves as a majestic gateway to the Mystery of Salvation accomplished in a miraculous manner in the person of the Apostle of the Gentiles.

II part: It is the account by the Evangelist Luke of the events leading to St Paul undertaking his voyage to Rome, during which he ends up landing on the Island.

III part: St Paul’s prayer. The text is taken from the Apostle’s Letters, and it expresses his typical evangelizing burning passion.

IV part: It is the account of the storm and shipwreck. The sea bows to God’s will and makes Paul reach –dramatically – the island of Malta. The Lord turns the event in a blessing by saving all on board and making the Apostle evangelize the Maltese people.

V part: Psalm 29 celebrates the Almighty who wields the course of events according to His will and subdues the storm with His Word.

VI part: It describes the welcome given to him by the Maltese, and the dramatic events during the months for which St Paul sojourned in Malta.

VII part: The Oratorio ends with the hymn Te Deum, the solemn thanksgiving raised to God by the inhabitants of Malta who celebrate their conversion to Christ which has been obtained in a providential manner with St Paul’s help.

The biblical account of the shipwreck of St Paul in Malta and the conversion of its inhabitants to the Catholic faith was so dear to Dun Karm Psaila’s heart that – between 1915 and 1945 – he wrote no fewer than twenty poems on this subject. The poems, merely bearing the year of writing for a title as they have been published collectively (in an anthology edited by Professor Oliver Friggieri, published by Klabb Kotba Maltin and Karmen Mikallef Buhagar, 1980) under X ta’ Frar (10th February being the commemoration day of St Paul’s Shipwreck), were written in various styles and forms - ranging from short sonnets to more elaborate and complex forms, as is the case of the 1928 poem that was set to music by Christopher Muscat.

The composer divided the poem into three distinct but clearly linked movements. The first, sub-titled It-Tempesta (The Tempest), is not a chronological account of the proceedings of that stormy night. On the contrary, it gives a totally different but nonetheless all-too graphic perspective of the well-known story by focusing on the various elements (strong winds, dark skies, rough seas ...), all in the poet’s distinguishable metaphorical language. The movement is characterised by a strong, irregular meter and continuously shifting tonal centres. In a rare ‘aside’ moment, whilst the orchestra continues to provide subtle hints of turbulence in the background, a narrator unfolds how all this is necessary and according to the plan of a “kind Father”. When the storm resumes, the action immediately takes us on the galley and presents us with the very realistic prospect that everyone is going to drown and perish.

The second movement, Il-Helsien (The Rescue), presents the crucial moment in which St Paul (represented by a solo tenor) addresses the sailors and informs them that nobody will be lost as it is necessary for them to land on a “blessed island”. Consciously taking the actual moment of the shipwreck as a given, Dun Karm fast forwards the action and urges the local inhabitants to set on a rescue operation (represented by underlying military rhythms in the orchestra) as Paul is here “to embrace you with a promise of never abandoning you”.

This very promise (Il-Weghda) is the sub-title of the ensuing third and final movement of this cantata in which Dun Karm makes a spiritual address to his country. The orchestral and choral writing consciously moves towards a more conservative and tonal style in order to give ample space to the message of the text to get through whilst building up towards a rousing finale. Dissonant chords on the brass section, as if to give a brief reminder of the initial tense circumstances of this account, immediately give way to a very positive and bright ending. 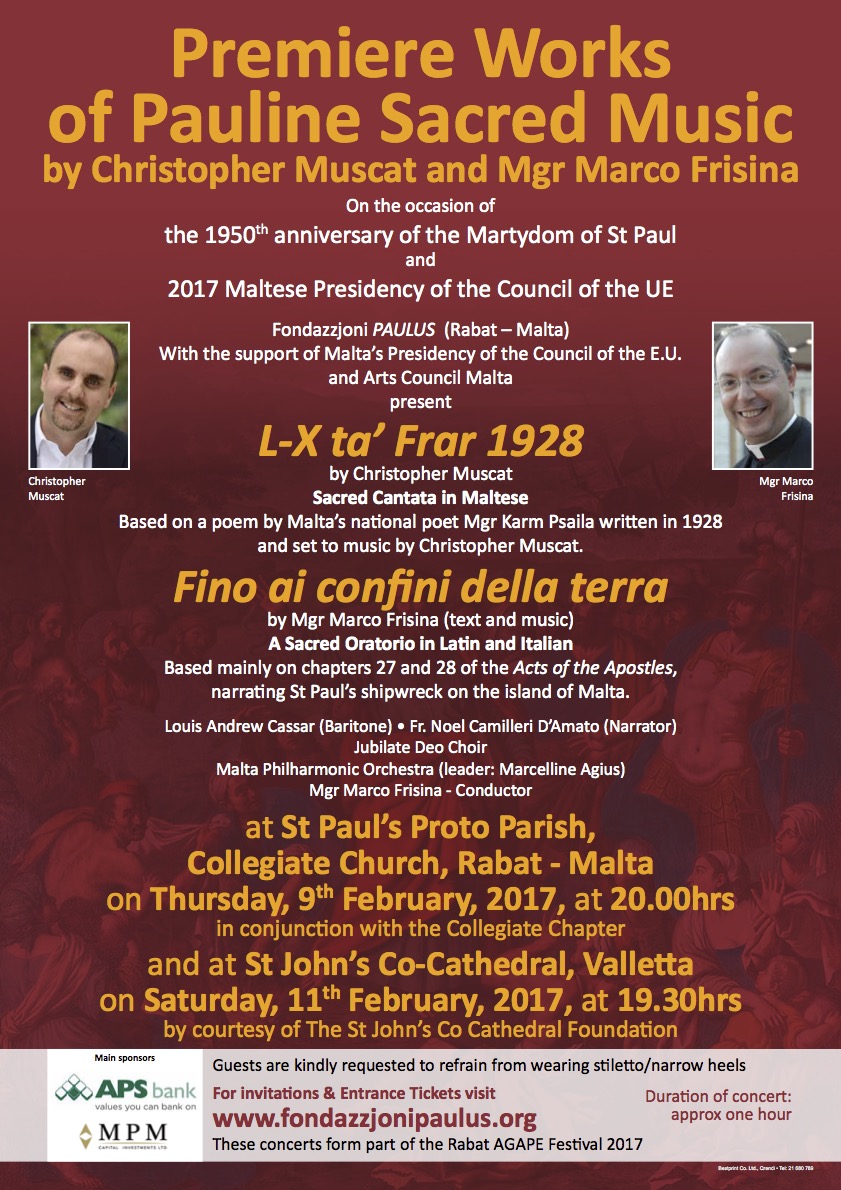